Muay Thai Classes for Self Defense 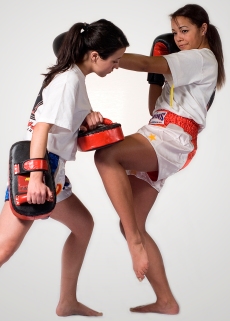 The ability for one to be able to defend themselves is always something great to have but when it becomes a necessity, one would rather tell a tale of how lucky they were to have had the foresight to be prepared, rather than tell a story of how they wished they had been prepared.

The sad reality of modern day living is that something like having the ability to defend yourself could prove to be very vital — so vital that it could be a matter of life and death or one which could help you avoid a very traumatic eventuality with a number of heartless and cruel perpetrators roaming the face of this earth, just waiting to cause trouble for others, and they generally tend to go for targets which appear to be weaker.

Now, there are a number of ways through which one could prepare themselves for any situation which would require them to defend themselves, one of which is via the combative arts and the advantage of doing so through the combative arts is that it is completely legal and doesn’t come with complications of something like requiring a firearm license.

On top of that, preparing yourself for self defense via the combative arts also entails the process of constructing a much fitter and healthier body, so it isn’t done for the sole purpose of preparing for self defense situations, but rather as a holistic approach to a better quality of life, in a very natural way.

How that is advantageous comes through the fact that a perpetrator who is suddenly faced with an onslaught from someone who makes use of the fighting principles of Muay Thai, does not know how to effectively react to the somewhat unorthodox striking methods that come standard with Muay Thai, so it is very likely to be much more effective than any other standard combative art form.

In addition to that, Muay Thai is very specific in which parts of the body can be used in combat, hence the name “The science of the eight limbs”, with more of a focus on striking combat to either deliver a decisive blow to the opponent or gradually wear them down by constant pelting.

If you‘re fascinated in learning Muay Thai, Call or Text Arashi Do Martial Arts North at 780-220-5425.  We offer a 30 Day FREE Trial and a Free Training DVD just for coming in.

Arashi Do North has been open since Jan 2004 (since 1985 in Alberta). We offer Karate, Brazilian Jiu Jitsu and Muay Thai classes to Children 4-7, 8-12, 14-16 and adults (16+). Come try out a class with use and check out our other social media for neat videos and photos.
View all posts by myackulic →
This entry was posted in Uncategorized and tagged Arashi Do Martial Arts, Arashi Do Muay Thai, Kickboxing in Edmonton, Muay Thai for Self Defence, Muay Thai in Edmonton, North Edmonton Muay Thai, Training Muay Thai. Bookmark the permalink.