Is it Muay Thai or Kickboxing? 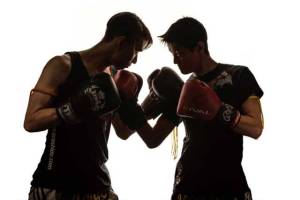 We have many people that come to our school that know very little about Muay Thai.  They get the general idea about the punches and kicks part… aaaaand that’s about it.  A lot of people get Muay Thai and Kickboxing mixed up as well.  While they are close Martial Arts relatives there are quite a few distinctions to be made.  Kickboxing technically focuses on Punches and Kicks above the waist… and that’s it.

Sometimes it is referred to as Continuous or Full Contact Karate/Tae Kwon Do.  Over my years of teaching I have seen more and more schools start incorporating the techniques that separate Muay Thai from other striking arts to capitalize on its popularity.  So lets get our list of what makes Muay Thai so different than Kickboxing, Karate, Kung Fu and Tae Kwon Do 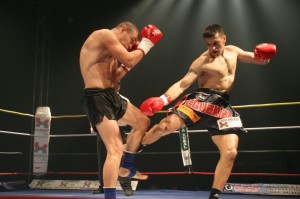 The leg kick is widely known to be a Muay Thai fundamental technique.  Beginners, older or less flexible people are able to use this move with effectiveness… and boy is it effective.  A well placed leg kick will make an attacker reconsider his poor life decisions.  The Leg Kick is Powerful, Fast and Efficient… and here’s a great story about it.

Rick (Duke) Roufus was a very well accomplished American Kickboxer heading into his match against Thai native Changpuek Kiatsongrit in his 1980’s competition under modified Muay Thai rules.  If you watch the video below you can see how well the match starts off for him.  By the the end of the fight, Changpuek’s leg kicks had served it’s purpose.  Slowing down the dynamic Rick Roufus and limiting his ability to move or kick effectively.  The video is 12:30 minutes long and worth every second of viewing time.  Lawrence Kenshin did a great job of breaking down the fight video which shows in his plus 12 MILLION views.

What Muay Thai lacks on punches (more on that in a bit) it gains in destructive Elbows.  When the Elbow is bent it is as hard as a rock and as sharp as a sword… two things I really don’t want to get hit in the face with.  The Thai’s have a crazy ability to stop fights with elbows and if you don’t go down after getting hit with one get ready for more elbows, each one threatening to cut your face open.  I am surprised the plastic surgeons in Thailand don’t give prize bonuses to fighters.  Incase you don’t believe me, or you just want to watch some buttery smooth slow motion of guys getting hit in the face with elbows…

Man that video just wants me to get up and sharpen up my elbows.  Now back to why the punches aren’t as much of a thing in Muay Thai.  You probably noticed, Thai’s are not very large people.  Whenever I go to Thailand I get a lot of looks.  My 6’2″ 225lb frame towers over even the tallest Thai’s.  Most men are almost a foot shorter than me and 100lbs lighter.  That means Thai’s often adopt a very high guard to protect their head.  This hand position does not make it very effective to punch from, but boy are those elbows ready to go.

Don’t get me wrong, there are punches in Muay Thai, but they are not as polished as boxing and it really depend on your body type.  One day I’ll do an article on Dutch vs. Thai style and hopefully I remember to link it HERE. Knees… they hurt.  Ever get kneed in the groin?  It sucks.  It’s even more painful than childbirth. (lol. jk. idk). If you go to any school that teaches women’s Self Defence this move is definitely one of the first ones covered.  That said, there are no knees to the groin in Muay Thai, and it wouldn’t matter much ’cause the guys wear METAL GROIN CUPS!  No joke and they are annoying to wear and awkward to put on.

Just like the elbows, knees are as hard as rocks.  When you get hit with one it is definitely a memorable moment.  I got hit in the ribs a few years ago the week before I went to Thailand.  I ended up getting a cracked rib and it sucked so much to train with that.  I was partnered up with a small girl at the end of class cause she didn’t have a partner.  I was playing nice and a little too loose.  She fired off a punch on my ribs and I collapsed.  The trainers pointed and started laughing thinking I was making fun of her.  When I started grabbing my side they realized it was legit.

Lesson learned for knees “It is better to give than receive”

Clinch is one of those funny things that usually means stop fighting in other martial arts.  But in Muay Thai it is a sought after position.  It’s a place to rest if tired or hurt or you need to refocus… BUT DO NOT RELAX!  The Thai’s have the ability to turn you upside down when they clinch you.  I like clinch a lot… I mean A LOT.  I am a BJJ Black Belt and clinch feels like home for me.  That doesn’t stop the 5′, 120lb Thai trainers from making me do half of a frontflip.  I can’t count how many times I thought I was going to land a sweet knee only to land on my head.  I can’t wait… here’s a cool vid:

Do you get it?  Like really, do you get it?  The Muay Thai Clinch is such a dominating position.  The timing Thai’s have is second to no one.  If a Thai person starts to clinch you just start crying, wet yourself and hope they leave you alone.  If you can master the Thai Clinch you will constantly have your partner freaking out about getting cut from elbows, broken ribs from knees or getting dumped on their head… it is such a great position to know…

… and ONLY MUAY THAI DOES IT!!!  Crazy.  Click HERE for a beginner clinch series we teach

Keep in touch with us through facebook and Instagram where I am always posting neat Martial Arts stuff.  We also have news about our school HERE

If you aren’t one of our members yet, come on down and try us out.  We have a great beginner class where you can learn these moves and of course lots more.  Classes are Monday/Wednesday from 12-1pm and Tuesday/Thursday 8:15-9:30pm.  Visit us at www.ArashiDo.com We have many dojos in the Edmonton area.

Arashi Do North has been open since Jan 2004 (since 1985 in Alberta). We offer Karate, Brazilian Jiu Jitsu and Muay Thai classes to Children 4-7, 8-12, 14-16 and adults (16+). Come try out a class with use and check out our other social media for neat videos and photos.
View all posts by myackulic →
This entry was posted in Uncategorized and tagged muay thai classes, muay thai clinch, muay thai edmonton, muay thai elbows, muay thai knees, muay thai self defence, muay thai vs kickboxing, yeg muay thai. Bookmark the permalink.